AN INTERVIEW WITH CHEF SHIRAISHI FROM HAKU 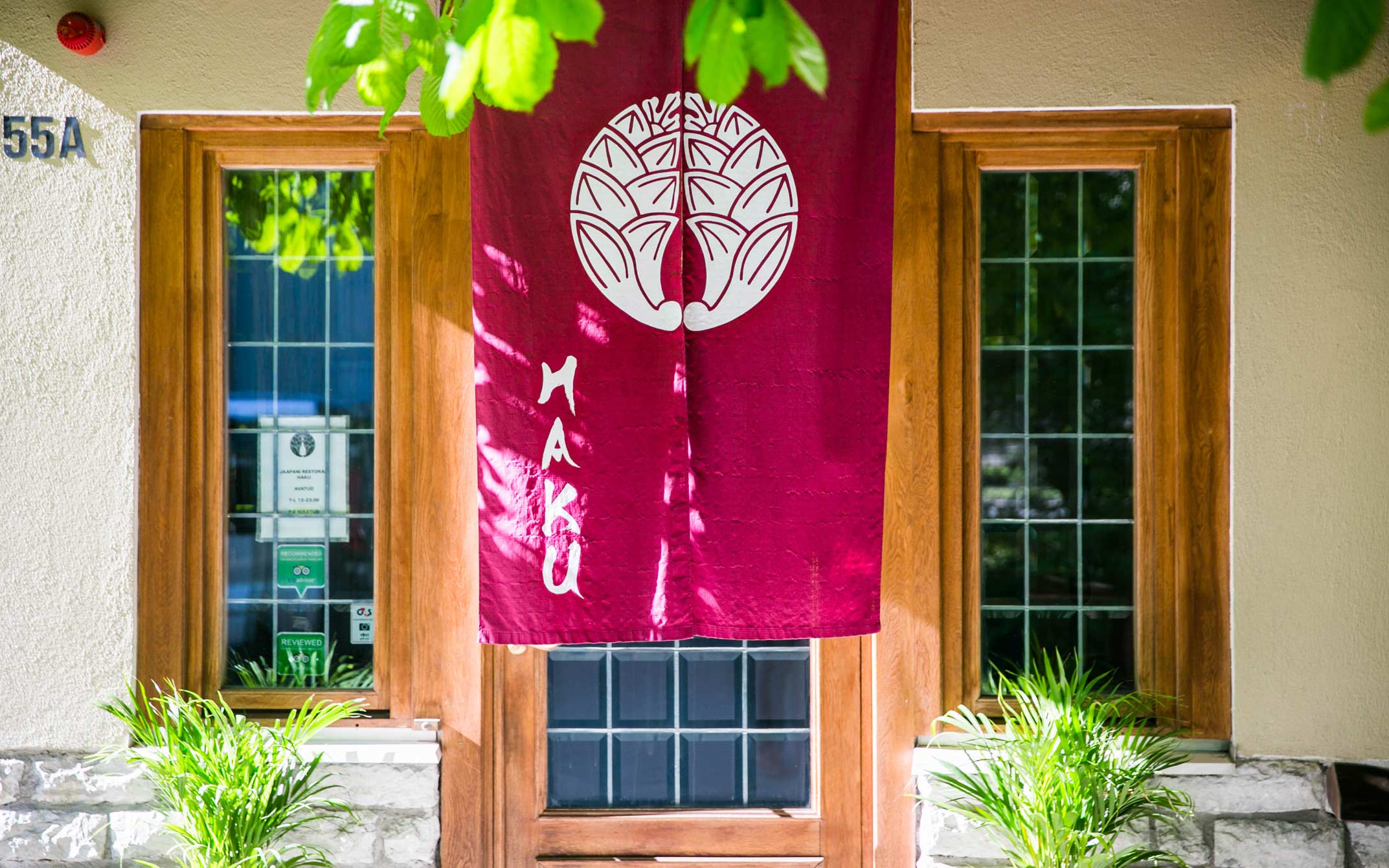 When walking along Narva mnt. the sidewalk gets narrow after the Methodist church. You got to be careful. The passing cars shoot slush at you if you’re not paying attention. At the same time you have to have your other eye looking for the right corner to turn. Behind the bigger gray building you find this cottage-like smaller structure. In front of it you wipe your shoes(!) and step in: you’re in Haku.

If you arrived at dinner time you are approached by a blond-haired lady in a kimono. This is Marju Shiraishi and she is going to take care of you, answer your questions about the cuisine, the drinks and Japan. Trust me. She must be one of the few, if not the only one, in restaurant business who has a university degree to do all this. 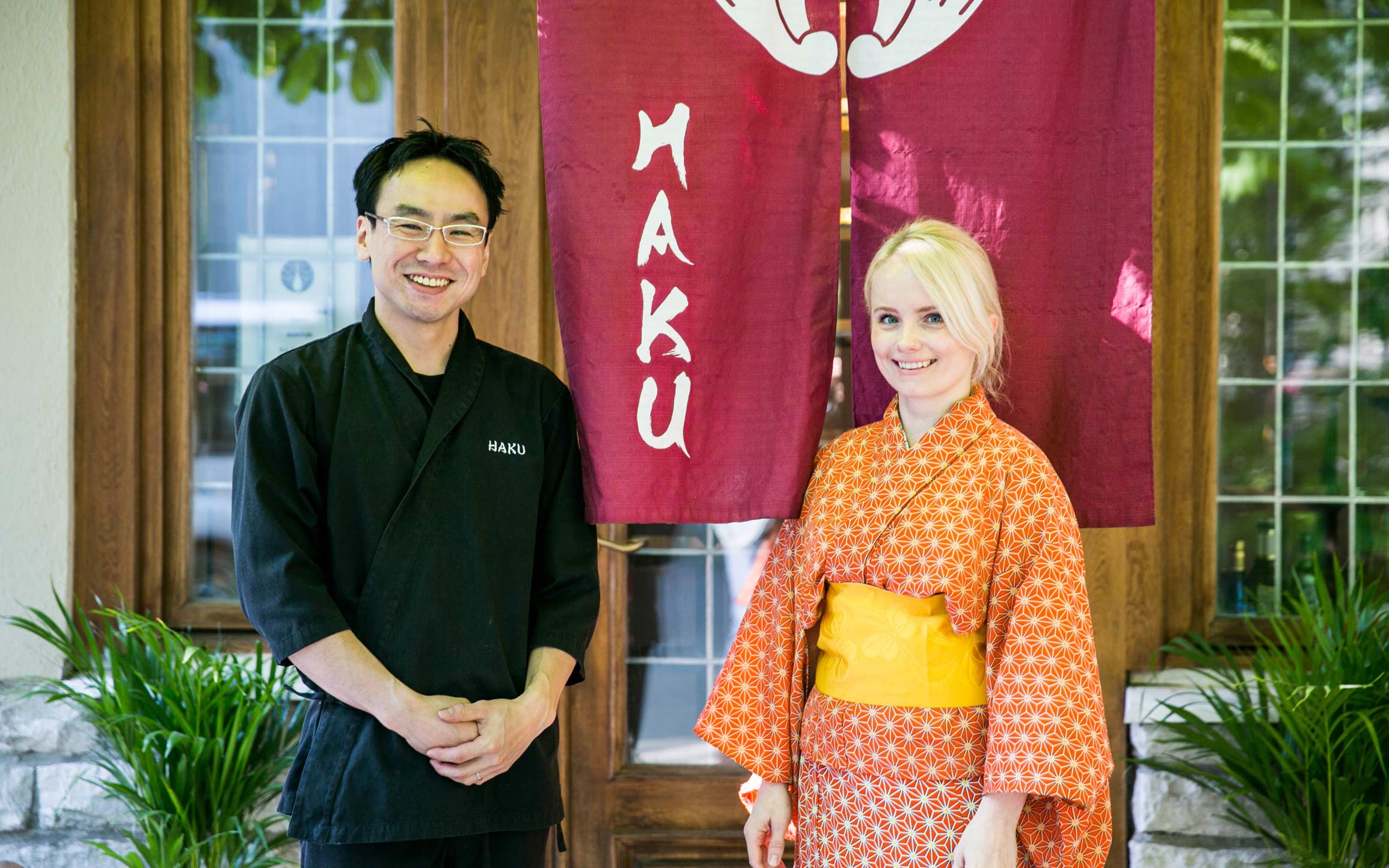 Where fat sizzles and a knife goes ”chop-chop”, you find Shuichi Shiraishi. A ”licensed” Japanese chef. Licensed, because Shuichi worked in the Japan’s embassy at Fidzi some years ago and there you need to be a licensed Japanese cuisine chef. He earned his laurels in different establishments around the globe, such as in a Michelin starred Bulgari hotel in Tokyo.
They are going to be the one’s, (and the only ones, since Haku does not employ anybody else) making sure you enjoy yourself in a traditional Japanese milieu.

My visit took place on Monday when Haku is closed. It is the couples ”day-off” so Shuichi is only wearing his kitchen jacket without the apron. Marju sits in her ”office” at one of the dining-room tables. Small stand at the end of the table says ”reserved”.

What happened after winning the Silverspoon awards?

Since the Silverspoon awards Haku snaffled in 2017 Marju and Shuichi have had to change the door-check once a month, especially the weekends are busy. This means the couple practically lives in the restaurant. Recently a Finnish magazine, writing about vacations in Estonia, published a long story of the Silverspoon winners. The word has it, many foodies, gastro-tourists and other hippies are lining-up in ferry terminals at summer to come participate in the Estonia’s culinary hype. It just might be that Shuichi’s and Marju’s summer vacation is canceled. 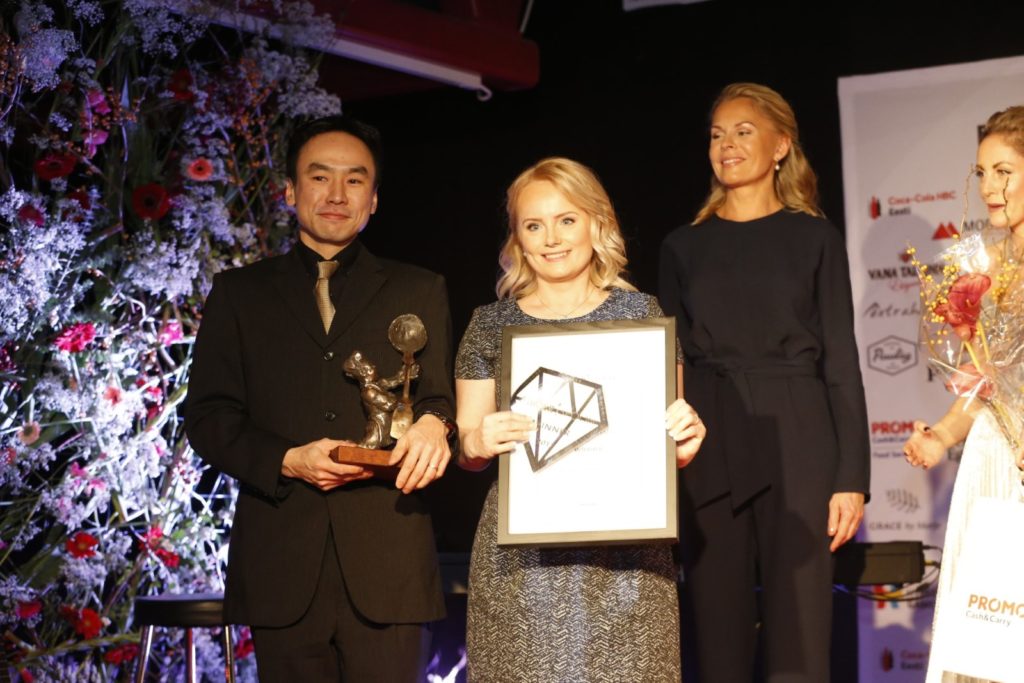 I asked whether they have thought about hiring extra hands. Without thinking Shuichi said ”no”. After an elaborate explanation it was clear that the man takes much pride in his work.

Working up the ranks

”Becoming a sushi-chef in Japan takes minimum ten years”, explains Shuichi. It goes without saying that he doesn’t rank the traditional western sushi-restaurants very high. The cooking school, in Japan, takes two years, but the restaurants are unwilling to hire people from school bench. Instead, an apprentice system is favored. You knock on the back door and ask if you can come to wash dishes. The story tells of the Emperor’s chef in Japan who, before obtaining his position in the Emperor’s court, had to beg behind a restaurant’s back door for weeks before he was allowed to enter as a trainee. 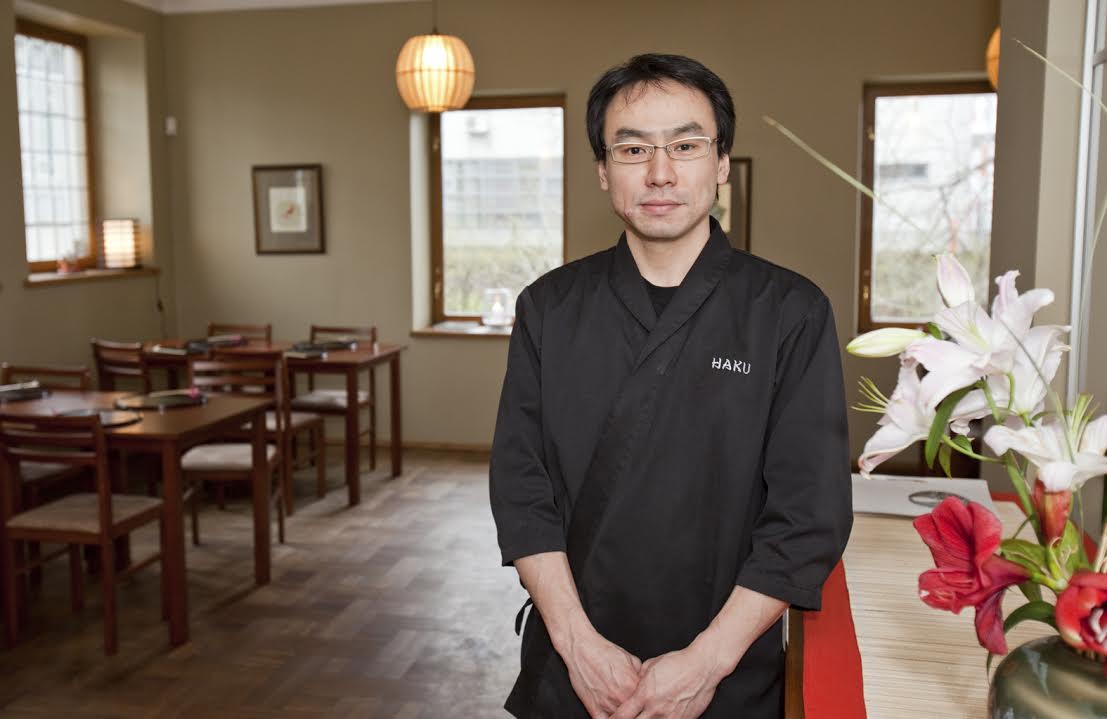 The first year was difficult for Haku. The guests didn’t find the restaurant. The couple insisted in not marketing their establishment, but instead, wanted to have the word go around. ”It is amazing how one week you have very few people. Then a reporter came to try our tataki. Next week everybody wanted to have the same,” laughed Marju.

Talking about trendy foods, what amazed Shuichi was the trendy drink kombucha, sold now in almost every respectable groceries store: ”It’s a Japanese thing. First time I saw it, I thought it interesting to have it here. Should the Estonian people like it?” It turned out the ”kombucha” was not the drink made of seaweed kombu, what Shuichi had been used to. ”Why do they give these names for foods which they are not?”, asked chef Shiraishi. 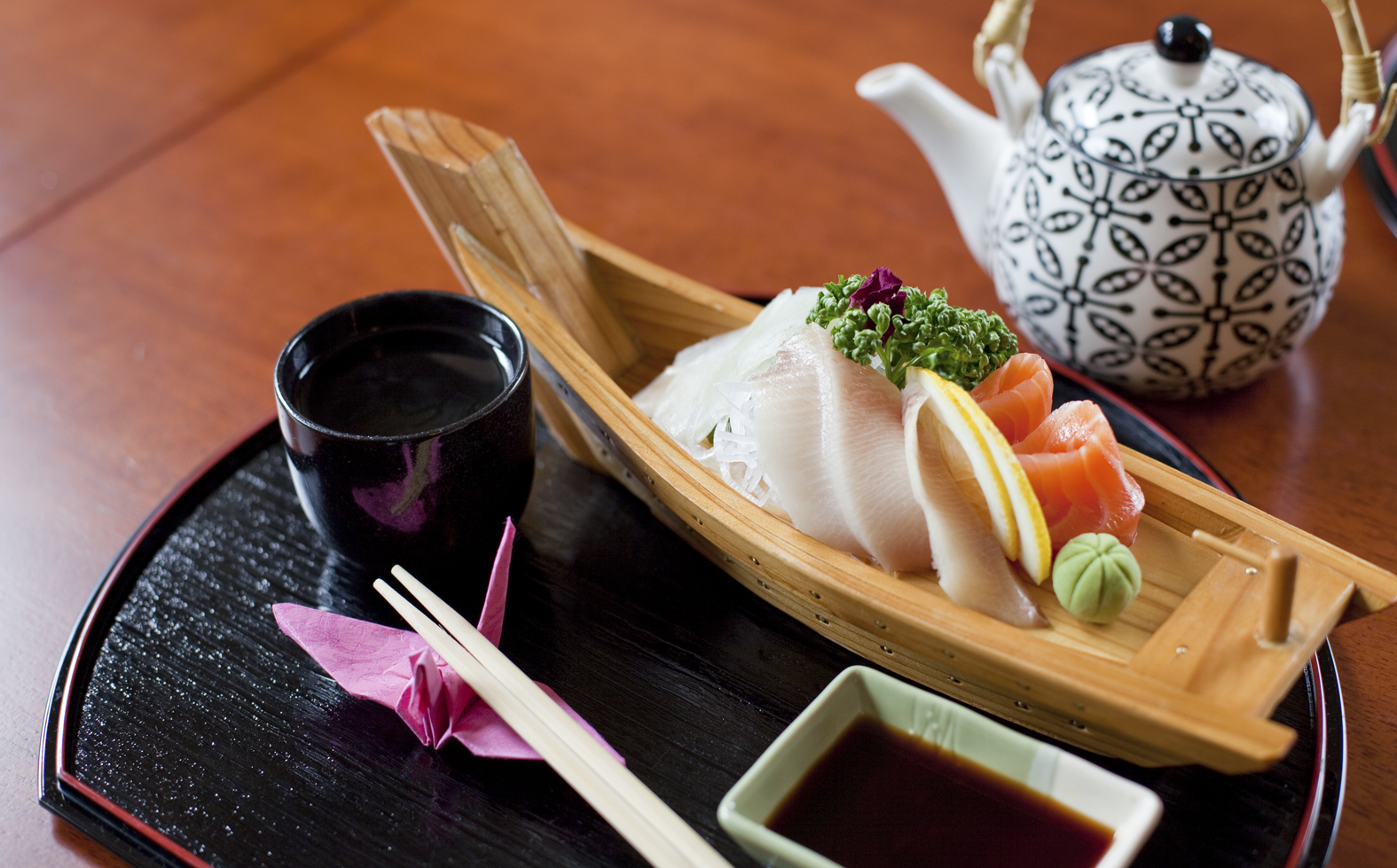 Preciseness is a virtue held tight in Haku, Shuichi told me while attending the fireplace. “We want to offer an authentic experience of a traditional restaurant. Some weeks ago a Japanese tourist came to eat here. She came back a week later just before she was flying back to Japan. I asked why’d she come when tomorrow she could go eat in Japan. She told me they don’t have places like this anymore in Japan!” 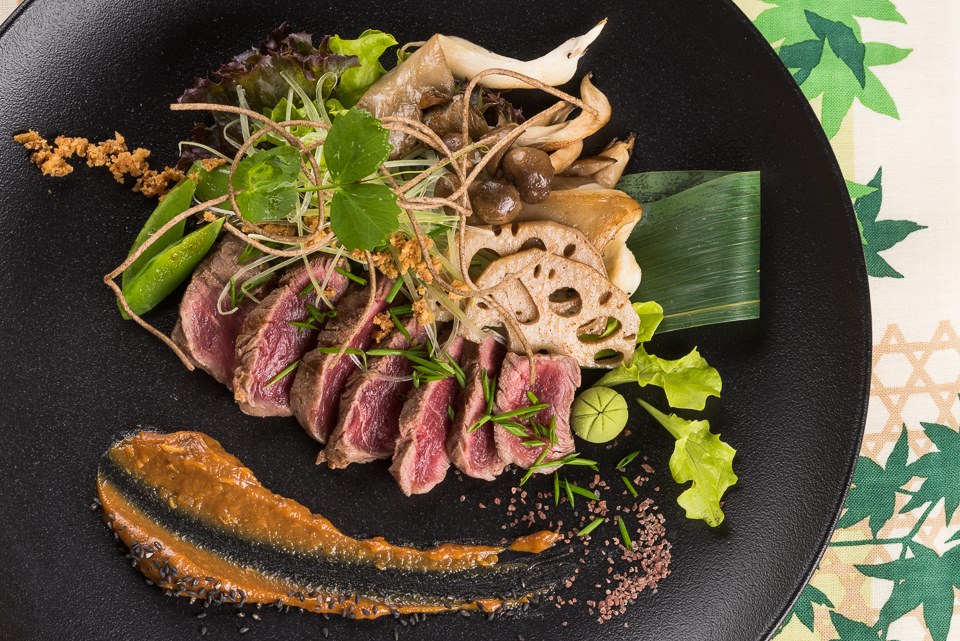 I take his word for it. Undoubtedly Chef Shiraishi is qualified for the task and it is quite possible that Marju, holding a degree in Japanese culture, can share you some insight about Japan that not every college student waiting your table in Tokyo could. 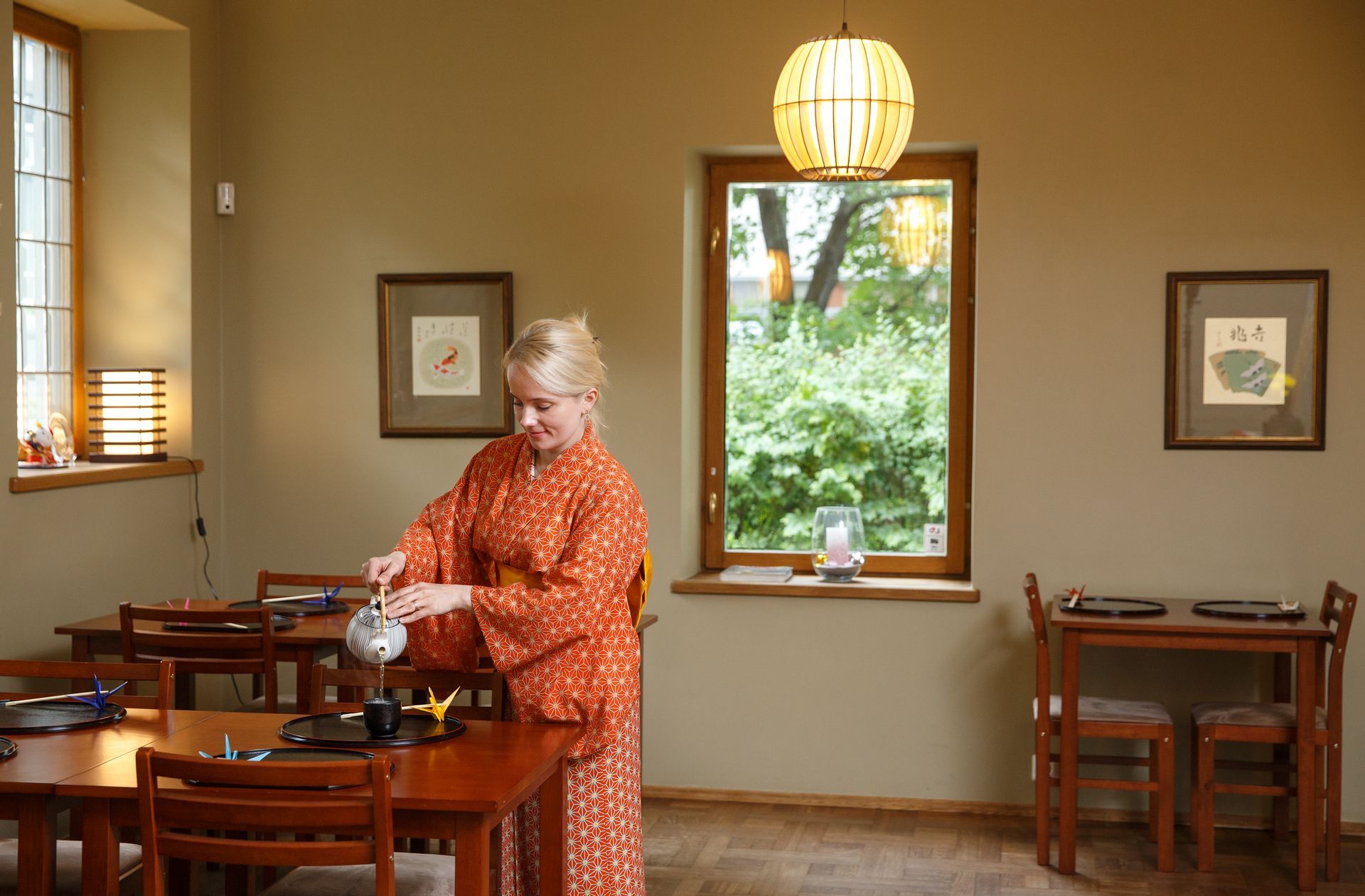 When I left I turned back to wave good-byes for the couple. It is mighty strange to see this cottage, with a piece of Japan hidden inside, covered in snow in the backyard of a block of flats. It is like visiting Narnia.

Chef Talks is a new Silverspoon Awards story series dedicated to introducing the hearts of every restaurants kitchen, the Chef’s and giving the readers a chance to learn more about the Top Chefs in Estonia.

The author, Juho Kääriäinen: a yesterday’s chef and a today’s hedonist, who consumes gastronomy in all it’s forms. He likes his steak “as kitchen sees fit”, and prefers Global-knives instead of MACs.”